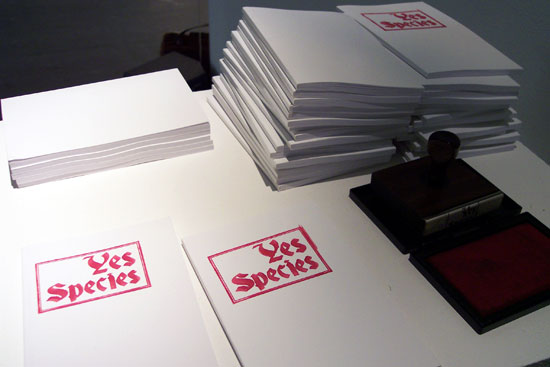 First developed for 1-0-1 Intersex: The two gendered system as a Human Rights Violation at Berlin's NGBK Gallery, "Yes Species" is a 20-minute performative tableau with video projection that imagines the meeting of three philosophers performing gender differently in a forest clearing: a live DJ mixing recorded vocalizations (Tsang); a performer (Wilding) standing in vats of red and green ink, blowing into vellum text balloons; and a performer (Willis) manipulating scrolls of text and stamping titles on the Yes Species book given away during performance. The work explores both the performativity of gender as theorized by Judith Butler, and the hope that “things can be thought differently” as Luce Irigaray has suggested.*